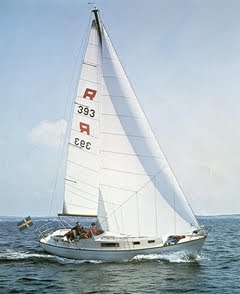 After reading Euan's post about his anchor setup, I rethought (I am bad about that) my system and decided to set it up like Euan's.  It wouldn't take much effort and I figured the benefits would be worth it.  I raised my windlass up 2.5 inches on a teak block, drilled a 2 inch hole in my chain locker hatch, mounted a hawse pipe in the hole, and bolted a roller in front of the hawse pipe.  It works really well with very smooth operation with no hangups.  If one should occur, everything is accessible at the windlass.  Pics below:

I finished the bilge pump setup.  I installed two electric bilge pumps, one 1100 gal/min primary which is mounted on the bilge floor(actually I bonded a false floor on in the bilge made of g10 frp and mounted all screws and bolts to it for attachment of pumps), a 3800 gal/min secondary pump mounted 3 inches above the bilge floor in case the primary gets overwhelmed, and a manual pump with handle in cockpit.  Each pump has its own thru hull and siphon loop.  The only problem I have with the system is that in a situation where the primary fails, and the secondary kicks in, the back flow of water from the filled bilge hose into the bilge after the secondary kicks off will cause the secondary pump to cycle on and off continuously.  Not good.  I don't want to put check valve in the system but may have to.  Pics below. 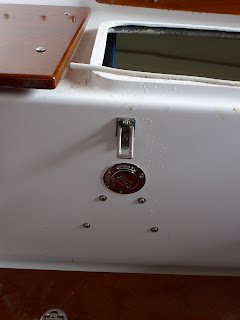 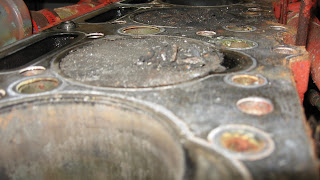 Working on an engine rebuild after the engine would not turn over due to carbon build up in the cylinders. 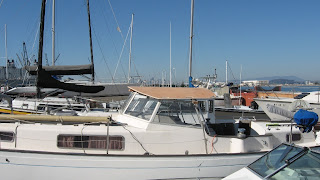 I used Euan's idea of directing the anchor chain around the windlass and back forward, entering the chain locker from the hatch.  I raised my windlass up 2.5 inches off the deck and placed a small roller in front of the hawse pipe mounted on the hatch.  It works really smooth with not a hangup anywhere.  Thanks for the great idea Euan!  I'll post some pictures soon.  I also just finished installing 3 bilge pumps, one smaller 1100 gal/min primary, one 3800 gal/min secondary(just in case the primary is overwhelmed. It is mounted 3 inches off the bilge floor) and one manual with the handle located in the cockpit.  I'll post some pics of that setup as well soon.
Happy Holidays
Pat
Posted by Pat Sixbey at 8:46 PM 1 comment: 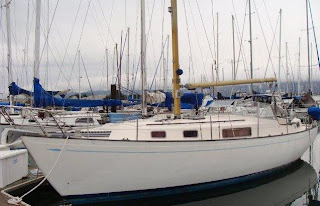 Aloha from the vessel "Joli' Elle" I just wanted to be sure I am seen....Martin Hull#270
Posted by Resurrection of the Irish Rose at 7:17 PM 1 comment:

Been reading Windtraveller about how they got stuck in a squall but not quite sure what Scott has for a foresail.
We have flatter water and slack tides in the sea lochs around us so get the opportunity to sail in stronger winds on a regular basis without being exposed to open ocean. As such, I have had the opportunity to be out in a F7 gusting 8 on a regular basis. Having experience what Scott did with my rail down under two reefs I had a third set of reefing points put into my main sail.
I only have two permanant reefing lines run in but they are on an adjustable track on the side of the boom. As such, I can shuffle them easily before I go out so I reef either 1&2 or 2&3. Not perfect but our forecasts are good so its works for me.
I use a no 2 120% overlapping genoa as my normal foresail but also carry a heavy duty working jib / no 3. It came with the boat and originally was hank on. I have a roller so have had a luff wire added so I can pull off the genoa and replace it with the jib.
If we go out in stiff winds the combination of heavy duty jib and third reef is just perfect. The sails set flatter and work much more efficiently in those conditions.
Tom Mair is cruising on his Nab35, El Viento, and I have followed his email letters regularly. He has the ability to set a removable inner forestay just behind his roller and runs his heavy duty jib up that. He also has a cruising chute which he swears by for light winds in the Med. Its still on my wish list as we have a spinnaker which get out occasionally.
Would be interested to hear what combinations you all have and how it works for you in differing wind strengths.
Posted by Cabatach at 1:28 PM No comments:

I have read of boat owners drilling and riveting pvc conduit on the inside of the mast to run wires for lights and other instruments.  I really didn't want to drill holes so today I glued pvc conduit on the inside of the mast instead of using rivets.  I roughed up 8 areas on the pvc pipe about the size of a playing card 4 feet apart all on one side of the pipe.  As I pushed the pipe into the mast(lying with the bow side of the mast down) I applied a golf ball size glob of 3M 5200 on the roughed up areas on the top side of the pipe.  Keeping the globs of 5200 on the top side of the pvc pipe, I slid the pipe all the way into the mast.  When it was in the right position I turned it until the 5200 contacted the mast and gave it a little jiggle to set it in place.  We shall see how this works.
Cheers
Pat
Posted by Pat Sixbey at 5:04 PM No comments: